This September has become all about the rainbow. Next week will be our first ever Rainbow Week in memory of babies lost to still-birth, neonatal death and miscarriage. And in celebration of the safe arrival of their siblings – the rainbow babies! This week we started our fundraising for Tommy’s on Friday we had our first group maternity rainbow photo shoot.

I’d had lots of interest on the run up, but on the day we had a cozy three take the leap of faith and show up. I owe a big thank you to Sarah Salisbury, Louise Lyon and Jade Colagan (left to right). 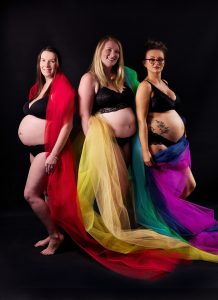 None of these ladies had ever met each other. Yet within minutes of arrival they were all stripping down to their underwear. And not without a lot of giggles! Three pregnant women battling to get their shoes and leggings off is a very funny sight!

Once clothes were off and composure had been re-gathered, we were ready to begin. I had a number of ideas that I wanted to do. But as I’d never done any of this before so I wasn’t quite sure what would work and what wouldn’t.

The session was very experimental and very much trail and effort. Not everything worked but we had a lot of giggles in the process of trying to bring to life my ideas. I’d been to the fabric shop and bought lots of coloured netting. I wanted something that would have a bit of sculpture to it rather than simple soft flowing fabric. 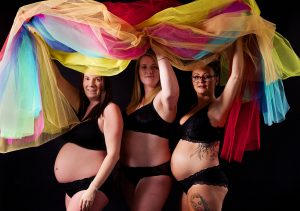 I wrapped and draped my models. We played with throwing the fabric (which wasn’t so successful), and then I sculpted dresses out of the fabric. Now I’m buzzing with even more ideas, so we will have to have another maternity rainbow photo shoot! I’m penciling in Sunday 4th November if you’d like to come along, no charge, but a donation to Tommy’s would be nice. 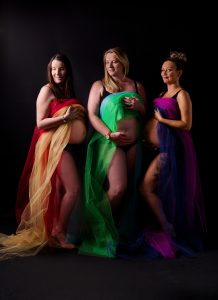 I’m thrilled with the results from yesterday, and I’d love to have my models back once their babies have arrived too. We can create a series of partner portraits with the babies in which will look absolutely fabulous!