Last weekend I got to live out a little dream I’ve had since I was a child. I got to go to camp!

My babies, now six and eight, joined 35th Lancaster as Beavers just nine months ago. And as this was their second camp already, I couldn’t resist tagging along.

I was a brownie once upon a time, but my gentle division’s forte was making tea and cakes and a far cry from the wonderful, gung-ho experience my children are enjoying now. Michelle, 35th Lancaster’s ‘Gold Beaver’ and the children’s leader has a wonderful way with the children; gently directing them towards earning their badges and trying new experiences, whilst giving the children room to learn in their own way. She inspires so much confidence in her group that these little ones are happy to have nights away from home! 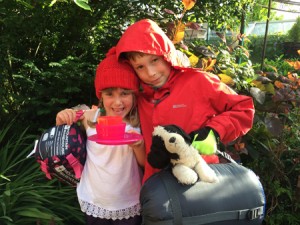 This weekend’s camp was at Bibby’s farm near Chorley. With waterproofs, torches and snug sleeping gear packed, we caught the coach early Saturday morning. The fifty minute journey was just about  bearable with a repeating chorus of “are we there yet” starting five minutes into the drive.

We left the motor way and wound our way through country lanes, excited faces peering out the windows or tormenting the child next to them, and then just as the children were beginning to get beyond restless we pulled up in to a leafy farm yard to be greeted by Gold beaver and a dozen leaders almost as excited as the children.

Quickly the children were marched to a parade ground for the camp opening ceremony. Six hundred children stood waiting in a semi circle. We took our places and the leaders brought everyone to attention. There were salutes, welcomes and then the camp was opened by the raising of the flag. A little boy was singled out for his efforts in making friends the day before (cubs had stayed one night already) and was invited out to do the honours. I felt a little flutter of proudness for our team when I realised he was from 35th Lancaster. 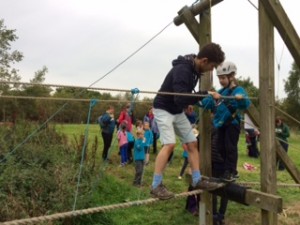 Then we were dismissed and were off to see our camp and quickly settle in before starting the activities.

This was the Scouts biannual district camp, with cub, scout and beaver groups coming together from all over Lancashire. And with everything from inflatables and grass sledging to archery and abseiling, this farm was a child’s paradise that had something to entertain hidden round every corner. I was amazed to find that the bus parked on the farm track was in fact a caving system, the children entered the bus, donned hard hats and set off squealing into it’s labyrinth of tunnels. 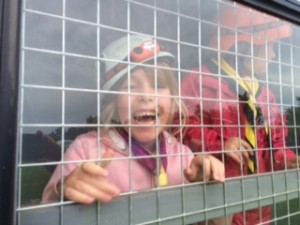 Our beaver group squeezed as much as we could into our morning, finishing with a thrilling round of laser tag in the woods. My children were in heaven. Then with tummies rumbling, we recharged with a spot of lunch before getting ready to do wet stuff.

I was a little bit nervous at this point, not quite sure I’d brought enough clothes to survive getting wet and then getting warm again afterwards. I was only a helping parent though, so I could always just sit and watch! Following map directions we set off for the lake down a grassy lane that was set up with a dozen mini activities, all there to entertain the children waiting for their turn to do the water tasks. Now I was really impressed with the thought that had gone into this event. 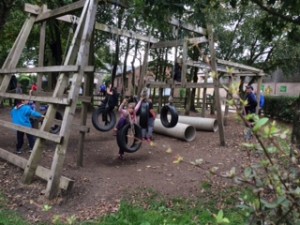 Michelle ensured we had taken our place in the cue for the canoeing and rafting and then the children were set free to play on any of the tasks the lane had to offer. My son disappeared quickly with his friends, but my daughter held onto my hand and we set out to do some tasks together.

We did a water safety quiz and then enjoyed watching half a dozen children constructing pipe networks across the sloping path to get a tennis ball into a box. They were taking in turns to sit in the box. Such a simple game, but they were loving it! Then we passed a group that were lined up and playing at passing jugs of water over their heads and between their legs, again, it looked great fun, but the water kept escaping, and happy to stay dry, we moved on. 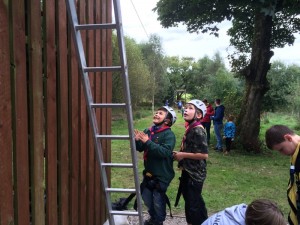 At the end of the track we found face painting, and the children that had settled their were thrilled that this task was self led and had no over seeing leader. We sat down and some bigger girls began painting my daughter’s face with varying degrees of skill. A bigger boy was also being worked on. There were whiskers, indian markings, butterflies. The boys legs were painted red and in-between each creation the children kept asking me if I would like anything painting. Eventually I agreed to something subtle and in a moment I was pounced on by my daughter and her painters. The sublet design went wrong and was painted over, that next design was painted over too and after ten minutes or so the girls had settled on a couple of shades of blue and some glitter. It was a hit, passing teenagers stopped to get blued up and the red legs boy also added a blue face. The face painting activity had become colourful chaos, and the children were thrilled to have a grown up in their midst that was letting them paint her. My daughter was very proud that I was her Mummy.

When I was finally released, Michelle and the rest of 35th thankfully didn’t recognise me. There was still quite a long wait for the water activities, so it was decided that we’d do something else. The paint felt horrid, and I felt silly, so I sloped off to wash it off.

The rest of the afternoon was filled with go carts, zip wiring, axe throwing (so long as you were eight or older) and climbing the assault course and rope bridge. I was relieved not to be getting wet and highly amused to keep seeing blue faces. 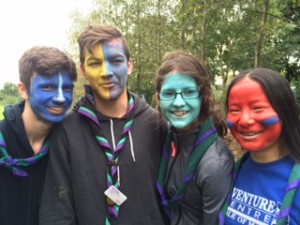 Then it was back to our camp for tea; 35th Lancaster Akala’s speciality, spag bol with baked beans. I wasn’t quite sure how that was going to work, but it was just the ticket to fill us up after all that adventure. 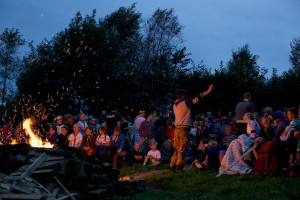 There was a buzz of excitement as the children finished their dinner and prepared for the evening, they changed into super hero costumes and charged about the camp in their capes.Then as darkness fell, it started to feel rather like being at a festival where aliens had abducted all the adults. Our group headed up to the camp fire and I wasn’t quite sure what to expect. Seeing the camp fire photos now, makes me think of lord of the flies. Children led by children. The grown ups were there, but they all hung back, once again letting the children have their space. 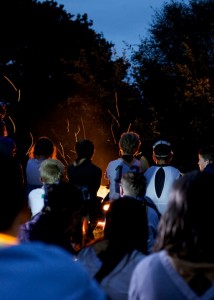 I learnt a few new camp fire songs and then it was time for the talent show. All the children made their way to the marque. Inside a DJ was playing and a larger than life leader in neon shorts was organising the children in preparation for the show. We enjoyed an act from each division; story telling, spinning glow sticks, singing and dancing. And the winning act was a fabulous break dancing and singing duo from our own group, 35th Lancaster. 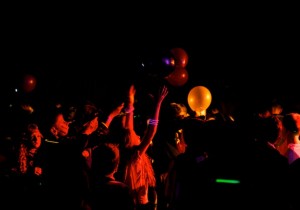 And then for the evening’s finally, the UV party! The lights dimmed, the music started up again and hundreds and hundreds of glow sticks were handed out to the excited crowd. Glowing super heroes charged about and we danced to songs I remember playing at my school discos. One by one the beavers wilted and Gold Beaver took them back to camp for hot chocolate and stories. A couple of home sick tears were shed, but Michelle reminded them how proud they would be of themselves tomorrow when they had achieved another night from home and this empowering thought did the trick. 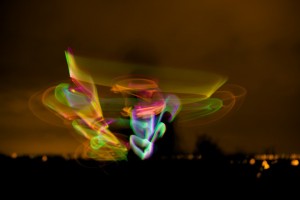 It rained through the night, and at 5am my little girl and her tent mate were at my door, needing a wee and saying their tent had leaked. We did a dawn stroll to the loos and then inspected  the damage. The tent walls were damp and so was my daughters pillow, but no puddles and nothing too drastic. I pulled everything away from the edges, turned her pillow over and declared their tent as good as new. Thankfully they snuggled back down for a couple more hours of sleep. 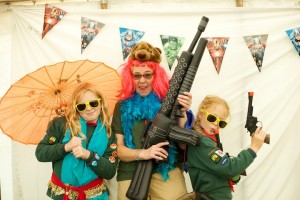 For Sunday’s activities, each group had been asked to come up with something, everybody set up around the parade ground and marque. As I had tagged along we’d decided to run a photo booth and it was a fantastic hit. Grubby children with the remnants of yesterdays face painting and UV smudged on their faces lined descended on our random array of props and dress ups and once again Lord of the Flies came to mind. You can see more of the wild and wonderful portraits we created on 35th Lancaster’s page. 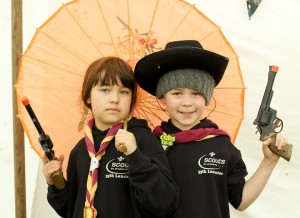 Then all too soon it was time to pack up and say farewells. We assembled on the parade ground once more and the camp leader asked everyone what had been the focus of the weekend. My little girl shot her hand up and the leader came over to hear her answer. “That’s right” he said “To make new friends and try new things, because we can all be super heroes”, and then he invited her up to bring down the flag and close the camp. And my heart went all gooey. 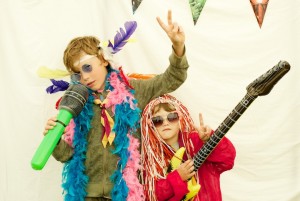 What a wonderful weekend!